With all my maintenance parts together and collecting dust, it was high time I started installing everything. Prior to installation I tried to clean out the engine, injectors etc as best I could. To achieve this I did it in steps and used a couple of products. First I used seafoam, 1/3rd in fuel tank, 1/3rd in crank case and 1/3rd through a vacuum source to the intake. Drove for about a 100miles or so and in another half tank of gas added some Amsoil Performance Improver. Drained and filled oil using some regular shell oil and added some more seafoam in crank case. After another 100 miles pulled it in for all the maintenance work.

Have known the guys at Turbo Time in Cary, NC for years and they were kind enough to let me use their facility to do all my maintenance work. Which with the weather we chose to do at night, even though their facility is air conditioned. Matthew Meadows offered to help me with this endeavor. When I mean help, I mean he ended up doing 70% of the work. LOL. It is an absolute pleasure to work with someone as picky as I am so everything went fairly smoothly. After running through a plan of action with Matt we got down to it. 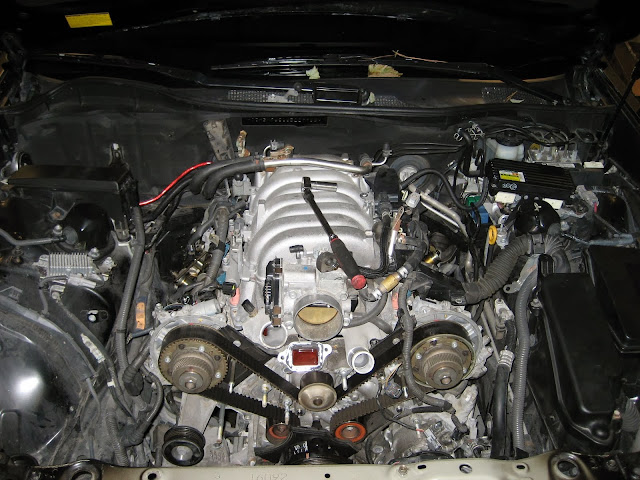 Tore out the valve covers, cam caps, throttle body etc to start changing gaskets, seals etc. While all the parts were out I wanted to accent the engine bay and make that part of the car look good as well. Had a vision in mind when I was doing this so hopefully it turns out as well as I picture it when I complete it. All the parts were media blasted and put through a parts cleaner, ready for paint. I used a high temp Gold and put a couple of coats of clear over it for some depth. 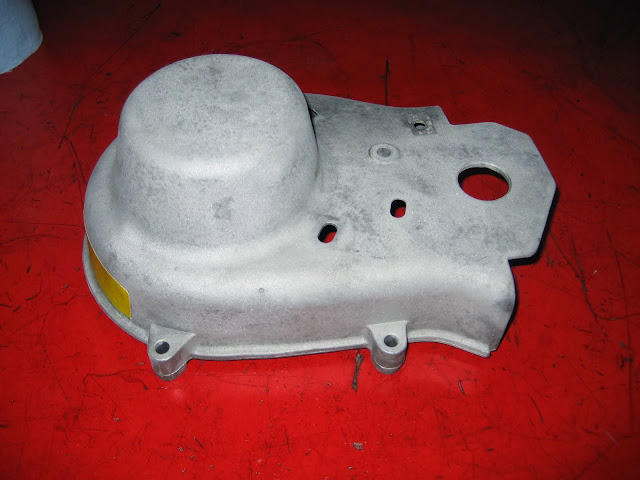 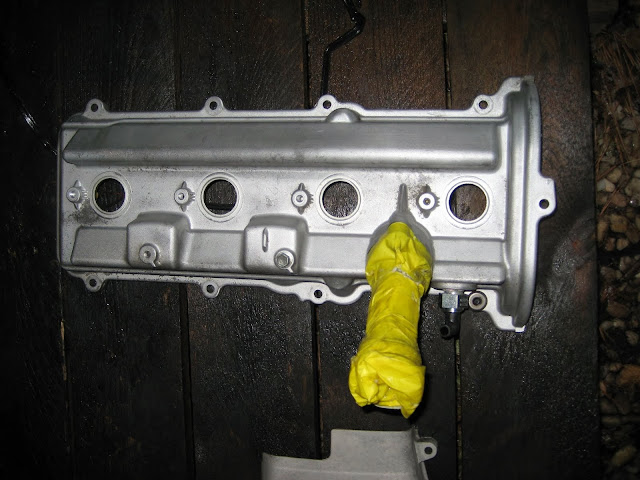 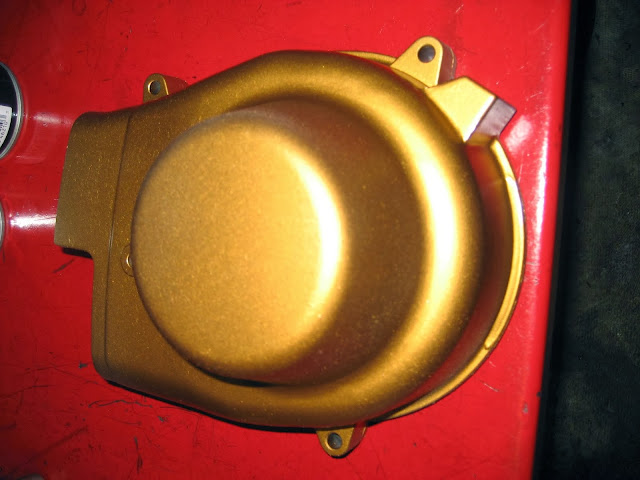 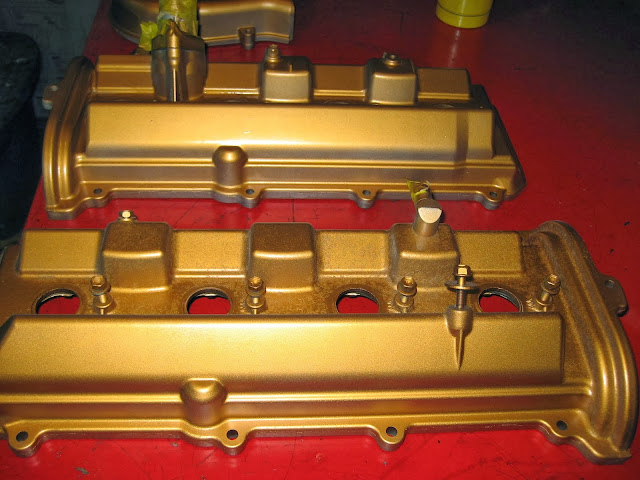 The throttle body was pulled out and was thoroughly cleaned out as well. 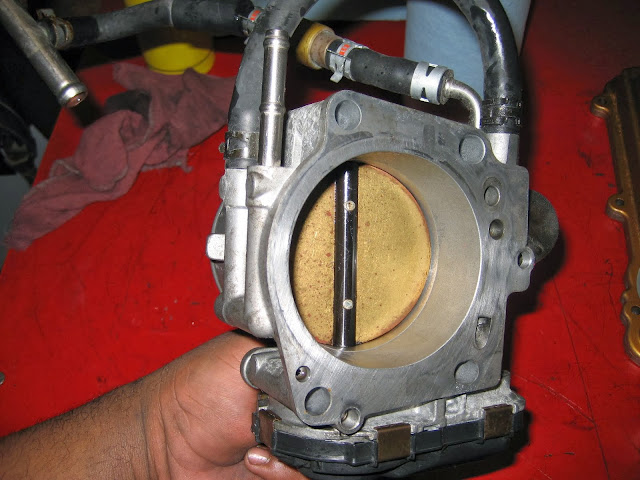 The spark plug gaskets were replaced as well from the valve cover. 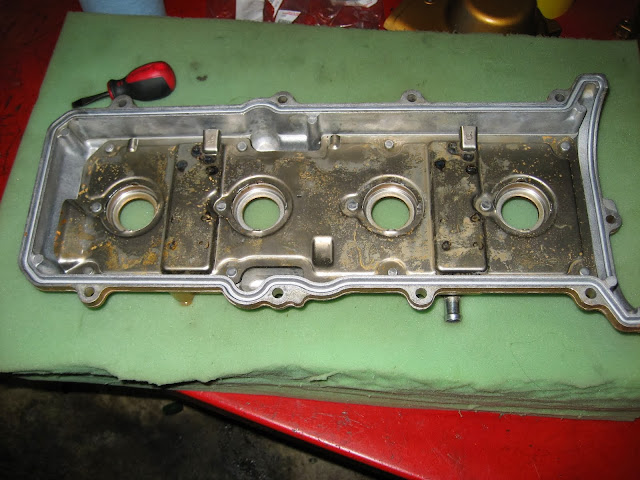 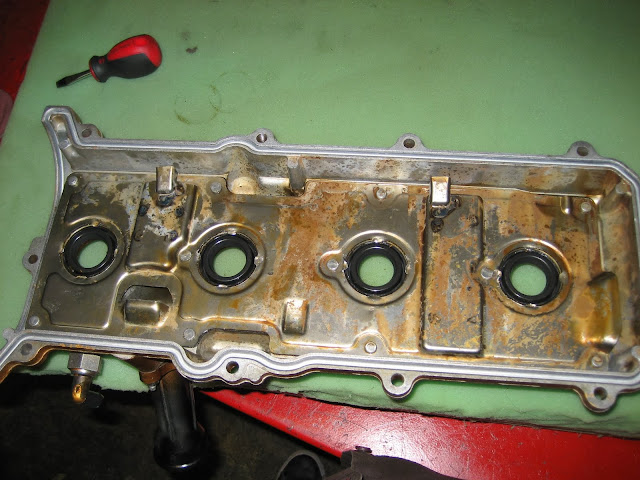 So while I was tackling all the paint and cleaning I got back to the car to find that Matt was done with changing the water-pump, all my gaskets, seals, timing belt etc. Without me asking he showed me how all the timing marks etc were on point even after a full 360 rotation. Awesome.

Roman Valenta who worked at Turbo Time stopped by and we decided to take a break and grab some dinner. After dinner he helped clean up more stuff in the engine bay and pulled my radiator out and gave it a good cleaning. Continued with buttoning things up. Changed the spark plugs put all the cam covers, valve covers and throttle body back in and buttoned up all the connections. Filled the radiator with distilled water (I will explain this later). Filled the engine back up with some non synthetic oil (Will explain this later as well) and we were done with that.

What we initially planned on doing was to complete the drive train maintenance aspect on Friday night and tackle the brakes etc later on in the day on Saturday. Well 3 in the morning we decide brakes wont take long. So we start on that. 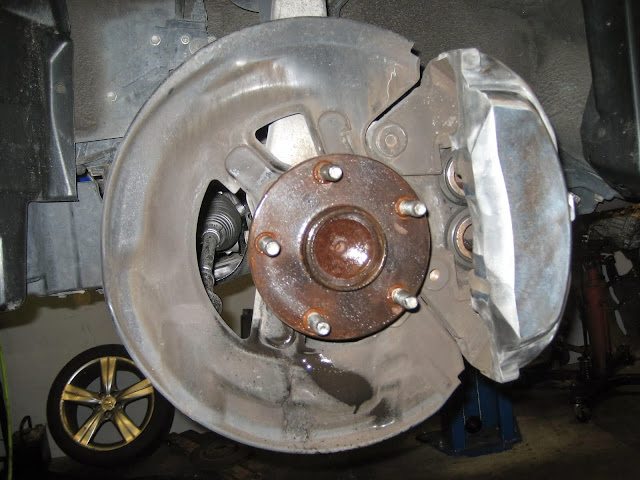 Pulled off all the rotors, cleaned out the rust on the hub and sprayed on a rust prevention coating before putting on rotors. Well also had to accent the calipers too. 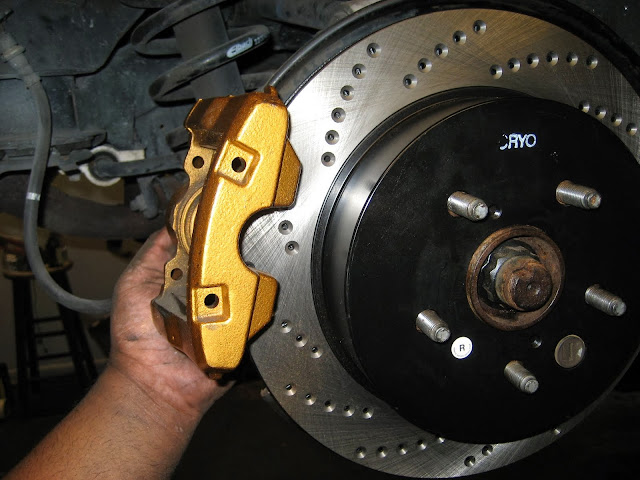 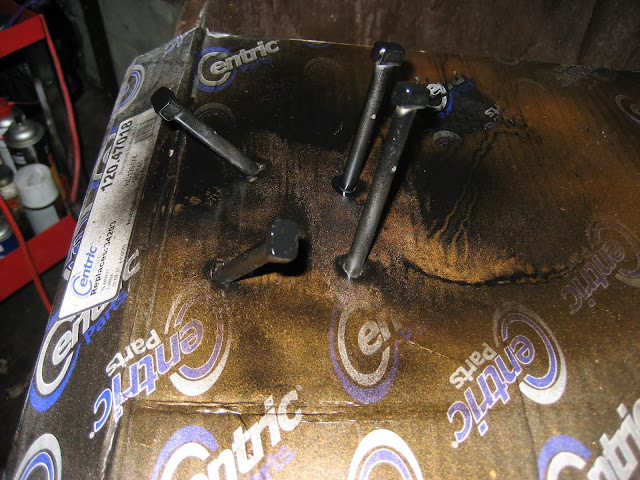 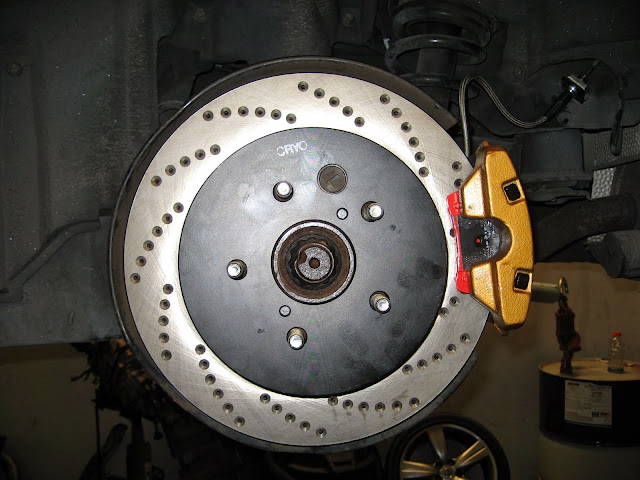 Notice how the pins for the calipers are black, that was Matt's idea. Can't emphasis how much easier it is to work with like minded individuals. Also in the pic you can see the stainless steel line installed as well. 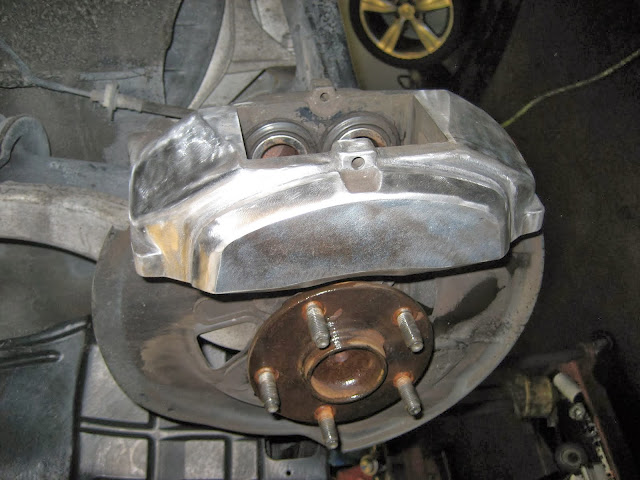 If you notice the calipers here it doesn't have a texture anymore. Matt smoothed it out before it got paint. Unfortunately with it being like 8 in the morning and exhausted at this point I forgot to take pictures of the finished product. Will do so at a later time but it looks clean.

Took another break for breakfast, where I was introduced to McGriddle. First time!! AMAZZINGGGG!!! Armed with McGriddle and some Mocha. ventured back into the shop to finish everything up. Thankfully Dustin Anderson stopped by to check on us in the morning and he stayed and helped finish things up.

I think every single warning light the car had came on when it was cranked. Yaw sensor, hee haw sensor, EVERY sensor threw a code. Thank fully I had the Lexus service manual and a mini tech system to plug in and diagnose issues. Matt double and triple checked all the connections. Verified that there were no issues, and all the codes were gone. Drove the car around the parking lot just to make sure everything was working, no codes came back up. Drove it around while doing a live monitoring of all sensors and there were no issues. Finally all that was done.

Next day, poured some radiator flush in the radiator that was filled with distilled water, drove it around for awhile and drained everything out. I pulled out the thermostat and the hoses and ran a water hose through the system to flush everything out. Installed a new thermostat and gasket, aired everything out, ran a vacuum to check for any leaks and refilled it with Toyota's Coolant. I had filled the engine with non synthetic oil the night before, the sole purpose was to just get rid of any residue of all the seafoam and cleaners etc. Anal, yes I know. Refilled with Amsoil 0W30 and called it a day.

Drove the car around and was taking it easy primarily because there is still the seafoam transtune in the transmission. Pulled it in for a full transmission flush the next day. Dropped the pan to clean it out and change the filter etc on it. 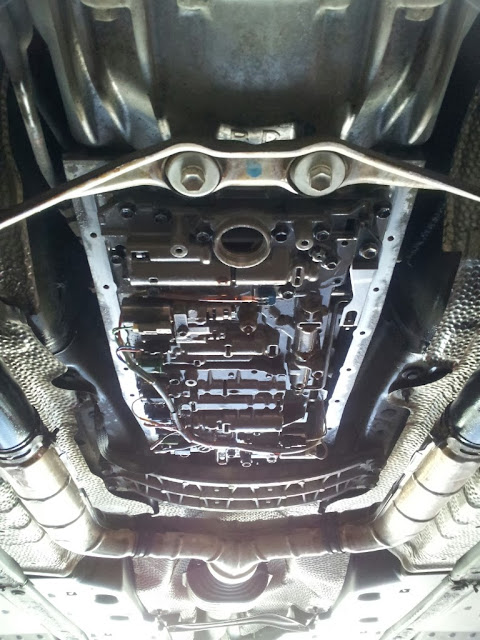 The oil definitely needed changing at this point. It was a brown color and definitely not what it is supposed to be. Sprayed some seafoam deep creep on the visible underside of the transmission to clean it out a little more. Put in a new filter, oil pan gasket, filled the transmission pan back up with the same amount of oil that was drained from it and then was hooked up to the trans flush machine. Unloaded 13qts of Amsoil into it and it pulled out all the old oil out and pumped in fresh Amsoil ATF. Gear shifts are definitely smoother and it made a difference when I did this to the GS300 as well. Huge improvement. Went ahead and changed the differential fluid out as well, replaced it with Amsoil 75W-90 Synthetic Lubricant.

Special thanks to Phantasm Motorsports for helping me get all the parts, Ryan @ Turbo Time for letting me use their facility and Matt, Roman, Dustin and Mark for helping me complete this.

After the loss of the 2001 GS300, a 2006 Lexus GS430 was added to the stable. Like with its predecessor a complete overhaul was planned. Usually the first things I change are the HIDs, leds, wiper blades and a JDM squash air freshener :). My wiper blade of choice are the PIAA blades and I would recommend them to anyone. Stock HIDs are replaced with 6k and the fog lights and high beams are changed to 6k HIDs too. I have a mini tech system now so was able to turn off my DRLs in order for the HIDs to work.

Prevention is better than cure, so with this mindset all maintenance parts were ordered. 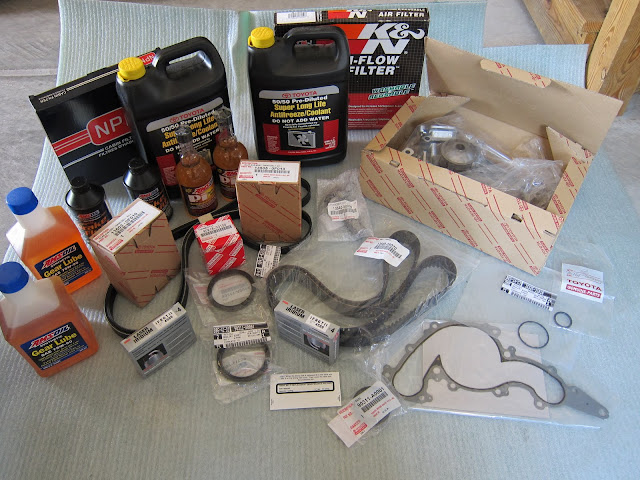 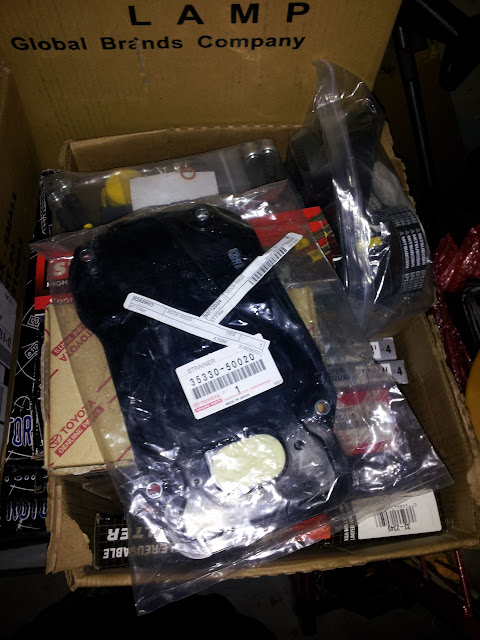 All lubricants: engine, transmission, brake, differential and power steering fluids are going to be cleaned, flushed and replaced with Amsoil fluids. A seafoam treatment, throttle body cleaning, cabin filter and battery replacement are also in the plans. 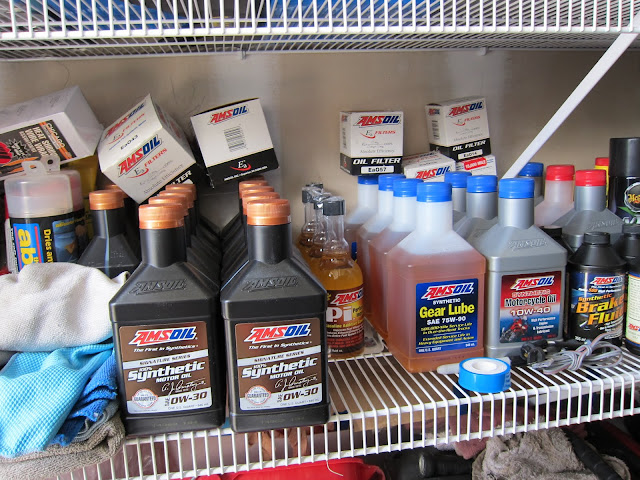 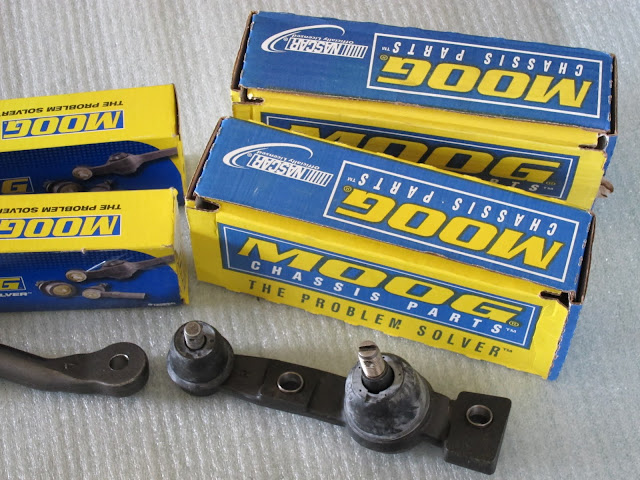 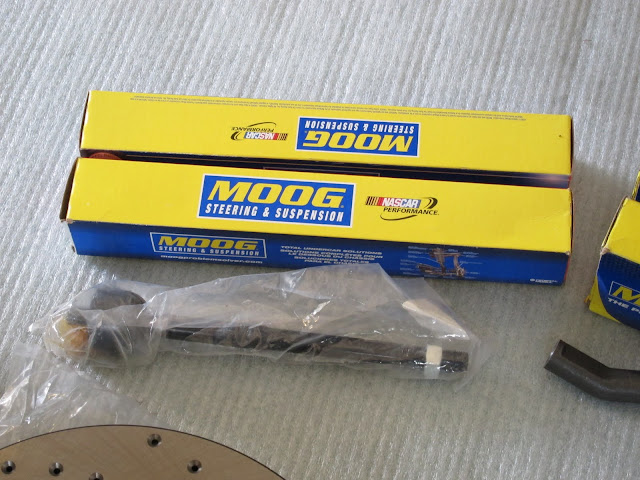 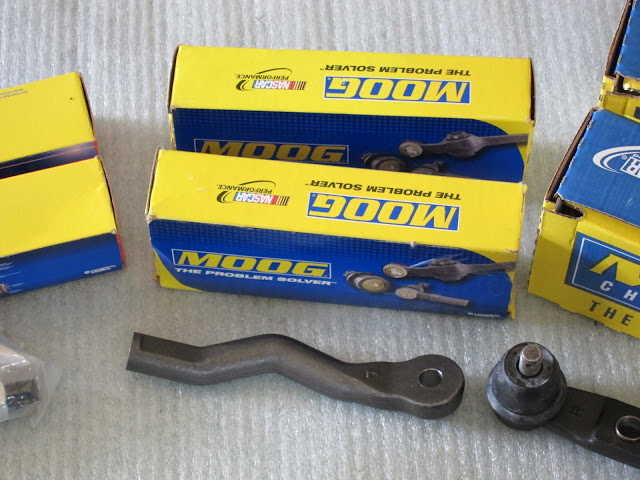 For brakes I chose to go with StopTech cryo treated drilled rotors. Decided to stick with Amsoil's brake fluid as well. On the GS300 I had got some Rotora rotors and got them cryo treated locally back in the day. That paired up with some HAWK HPS pads gave me all the braking force that I needed. Unfortunately Hawk does not make any brake pads for the 2006 GS430 and so I decided to give the EBC Red Stuff a shot. The cryo treatment removes all thermal and mechanical stresses within the rotor. With a more uniform metal structure, the rotor dissipates heat quickly, evenly and from past experience definitely enhances the life of the rotor. Definitely worth it. For more in depth reading on the cryogenic process you can goodle it :) or check this link out. 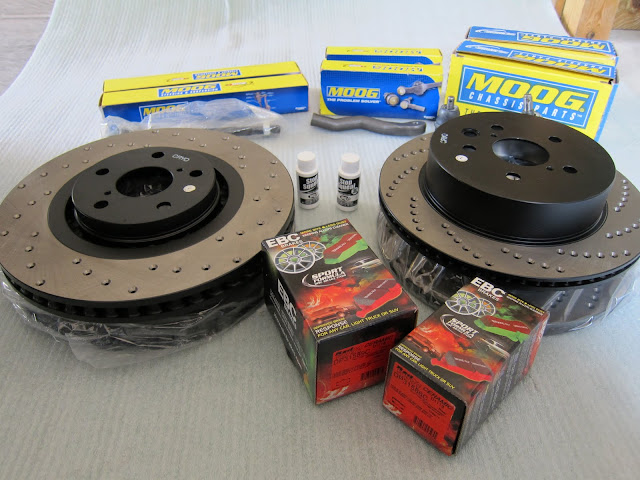 I also chose to go with the StopTech stainless steel lines which also has Teflon outer jackets. Previously I had Rotora lines but again Rotora doesn't make rotors or lines for the GS430. 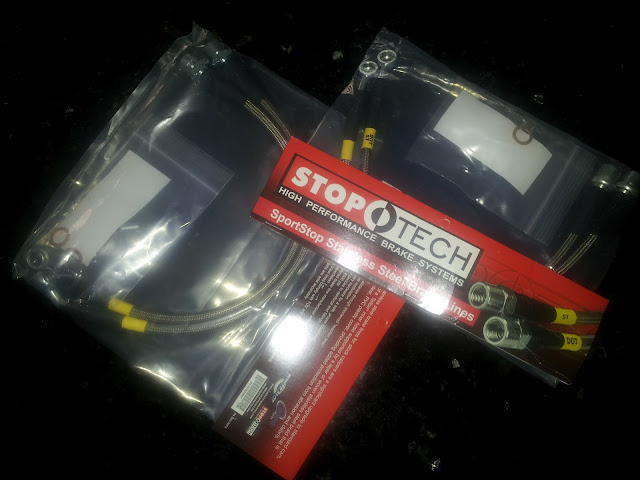 Updates on the install coming soon....
By Flawless Fitment - September 03, 2012 No comments: