With summer right around the corner I wanted to get the tints on my car redone, they were faded to an ugly purple. Steamed the tints off and got rid of all the excess glue. I don't understand people who drive around in expensive cars and cheap out on tint! Why would you not spend the little extra to and put good tint on and not use the dye based tint!! You can see that the tint started off black and has faded to a bluish purple!! Please use a ceramic, hybrid or metal based films.

Anh-tuan did the rear window's, don't know why we decide to do random stuff at night. Well it was dark and chilly but we got the tint off with minimal glue residue. Stopped with that and I let my tint guy do the rest. 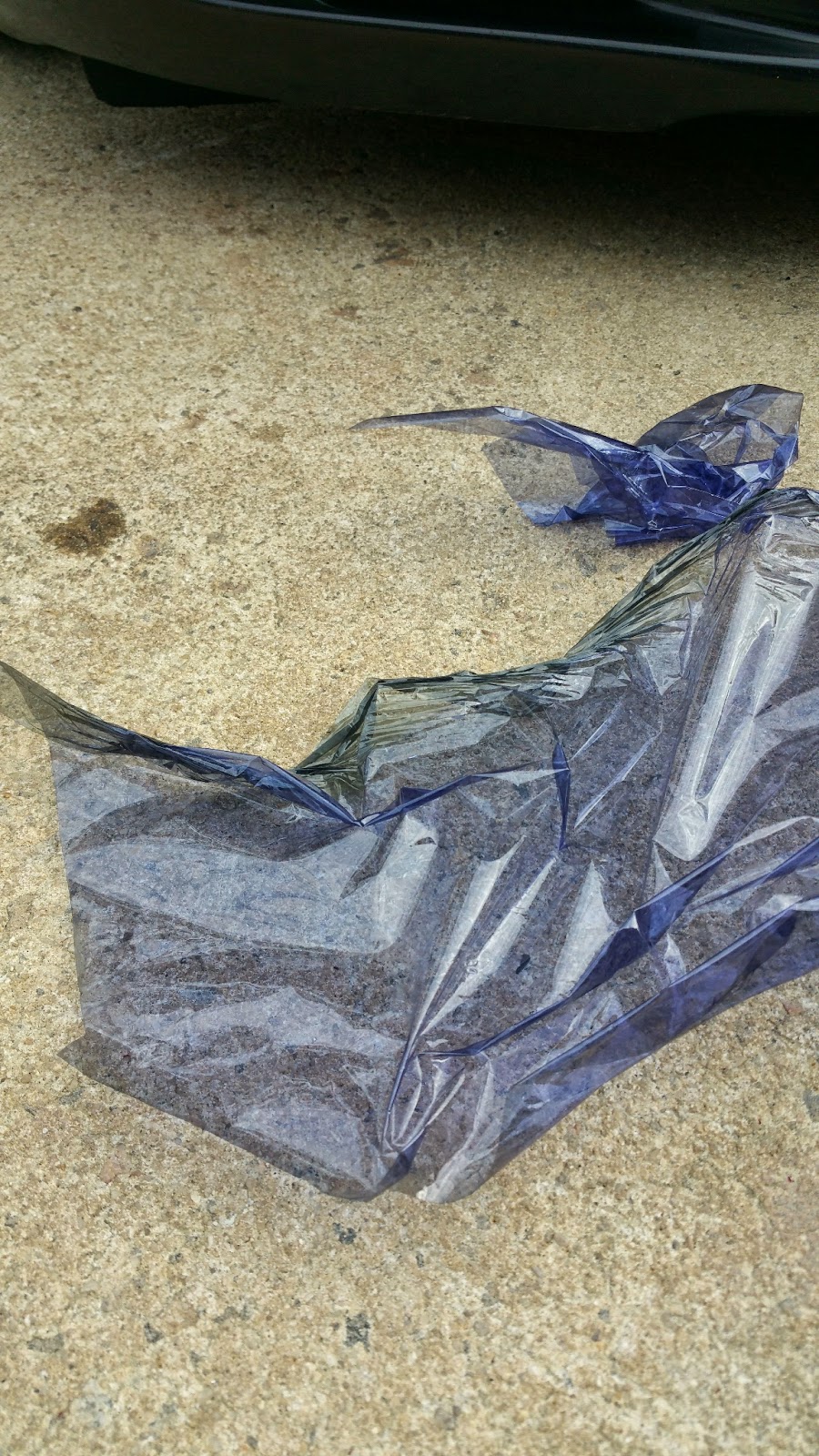 Went up to my tint shop and put some samples up. Gonna drive around and see which one I like. 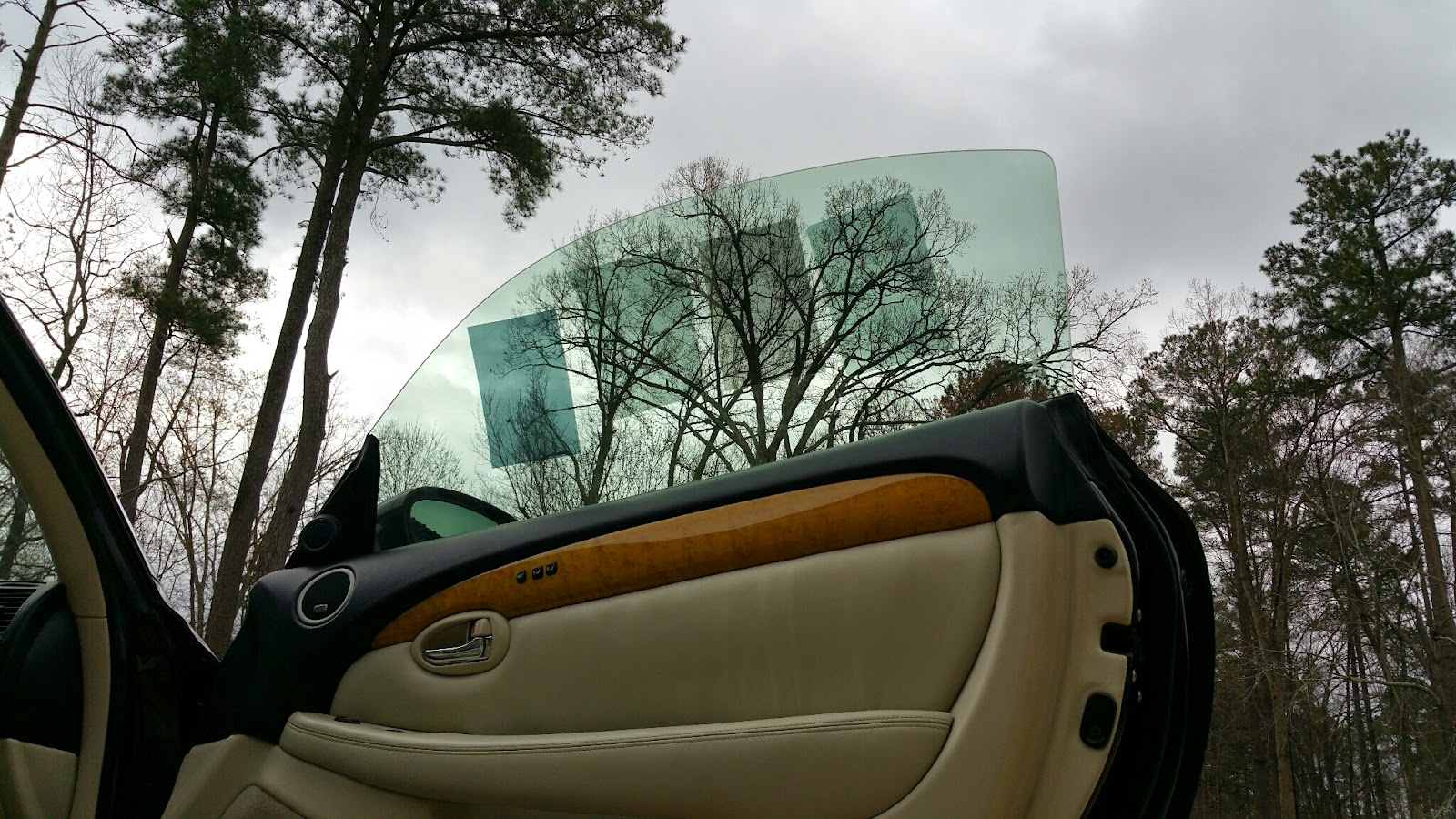 I think I'm ready for the summer. Picked out a tint which has a slight reflectiveness to it to flow with the color of the car. Black tint IMO would've stood out a little. I'm happy with it, have to give it a couple of days and go back to get the rears windshield a once over to get some air pockets out around the defroster lines. 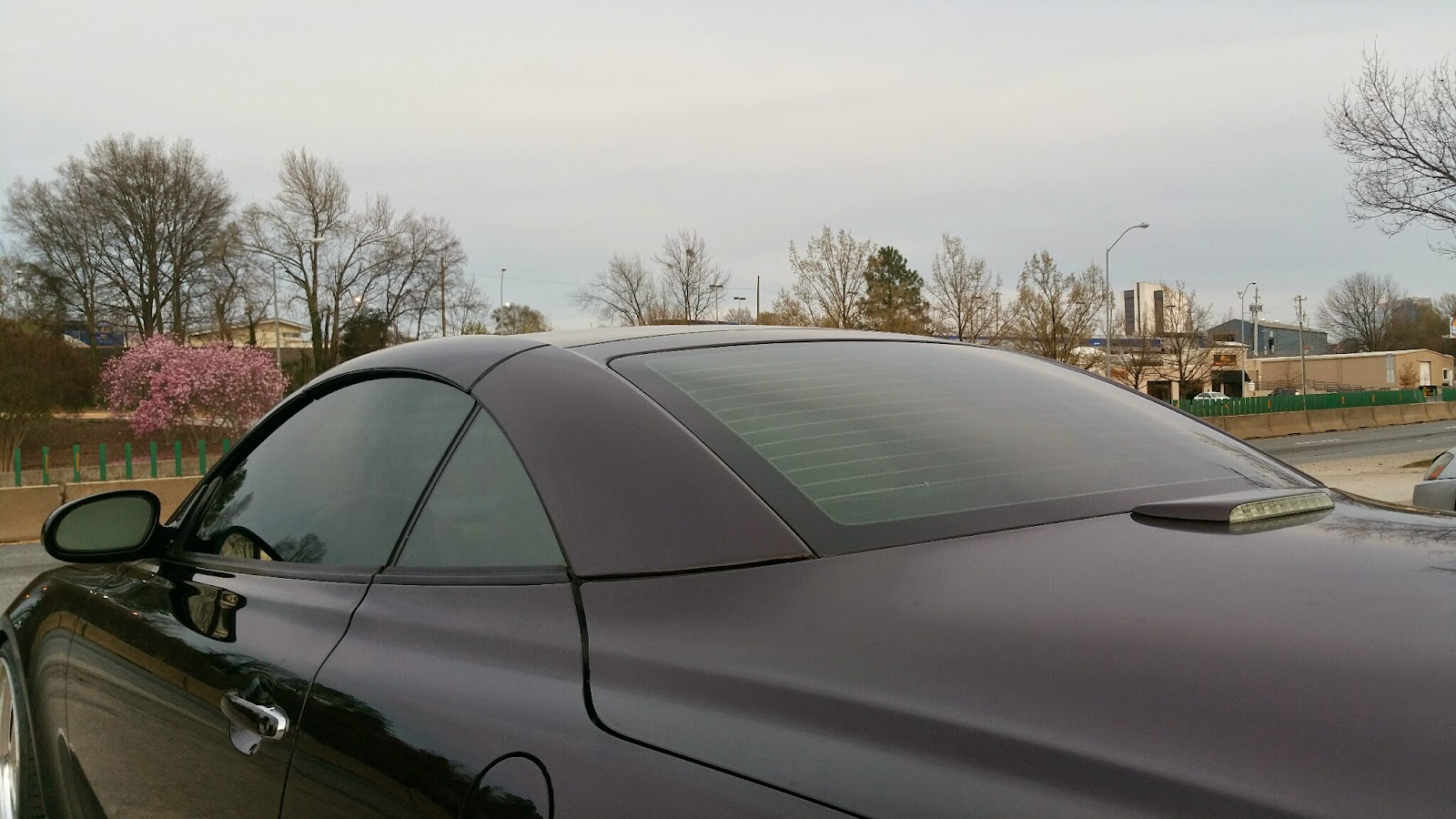 Over the week I got some time to finally install my air ride suspensions. I wanted to try a couple of different things so did the install at D2. Was trying to do it after work so took two days just because I wanted to try some new different bags that we were testing along with different length collars etc. Happy to say that everything is on and works AWESOME!! When the car is raised to stock ride height it drives beautifully, even lowered it drives amazing. Just waiting on a couple of pieces from ridetech to complete everything. But been driving it for the past two days and I'm very happy.

All the wiring, lines, valve body, ecu etc in the trunk.. 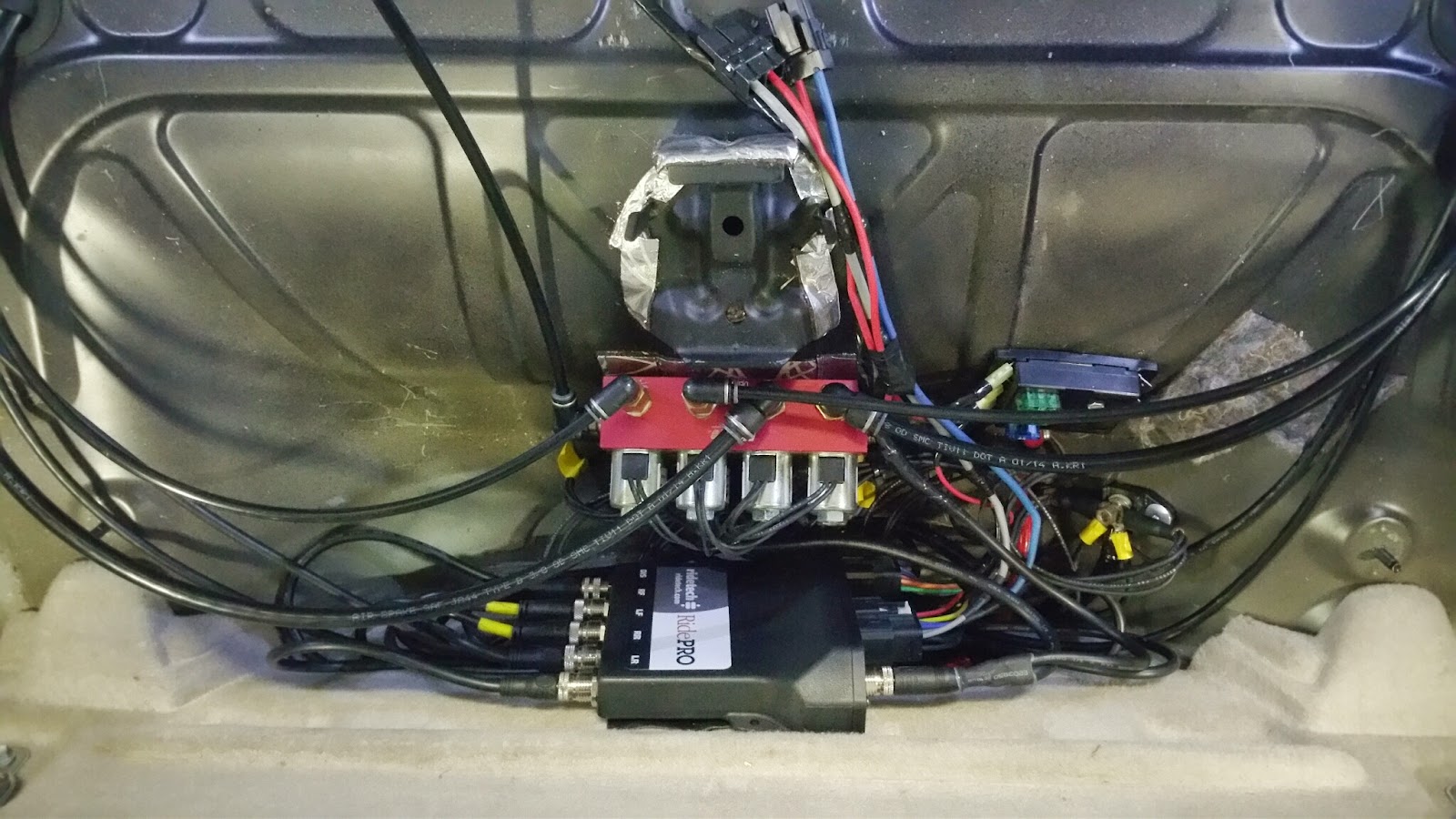 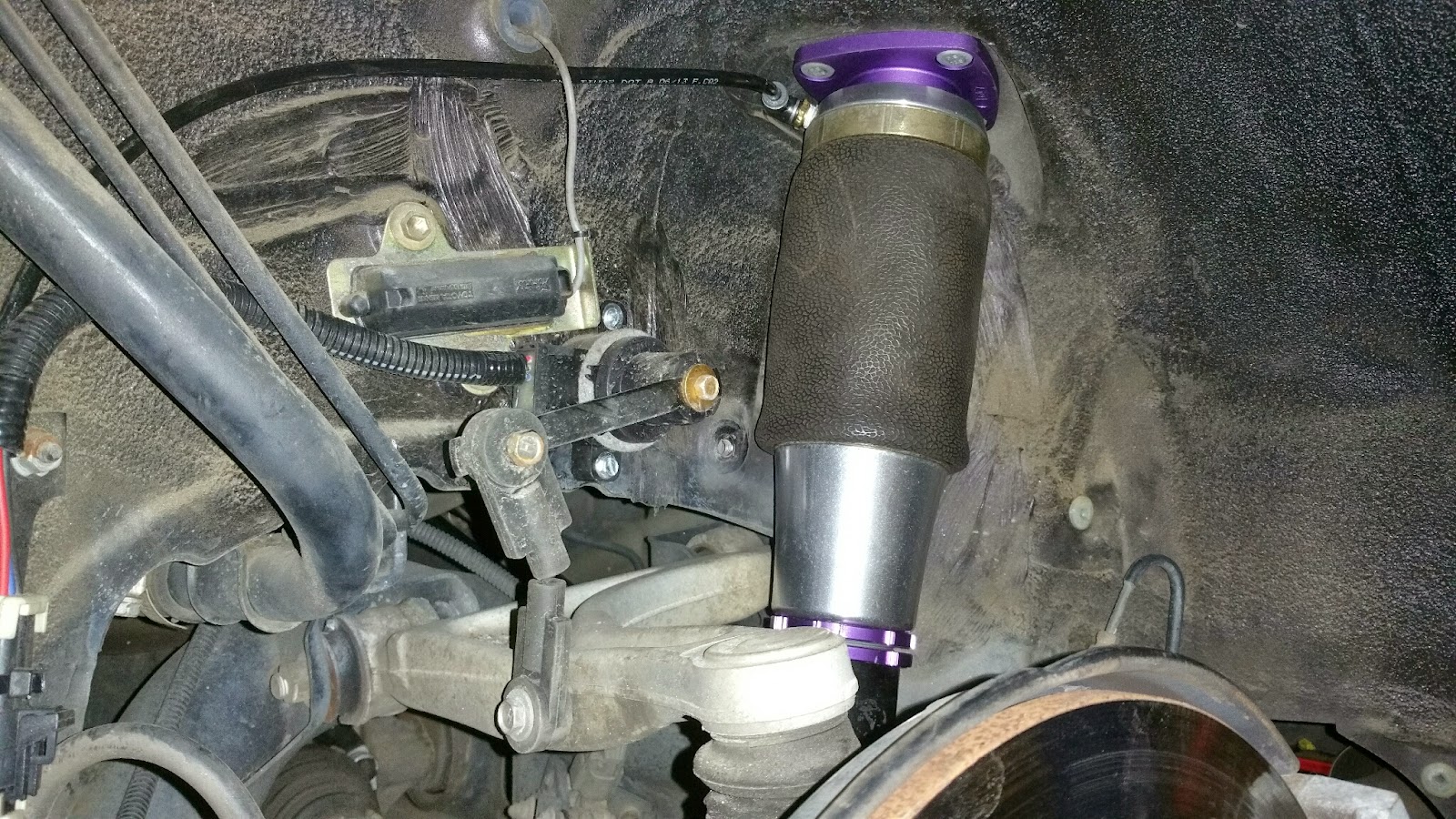 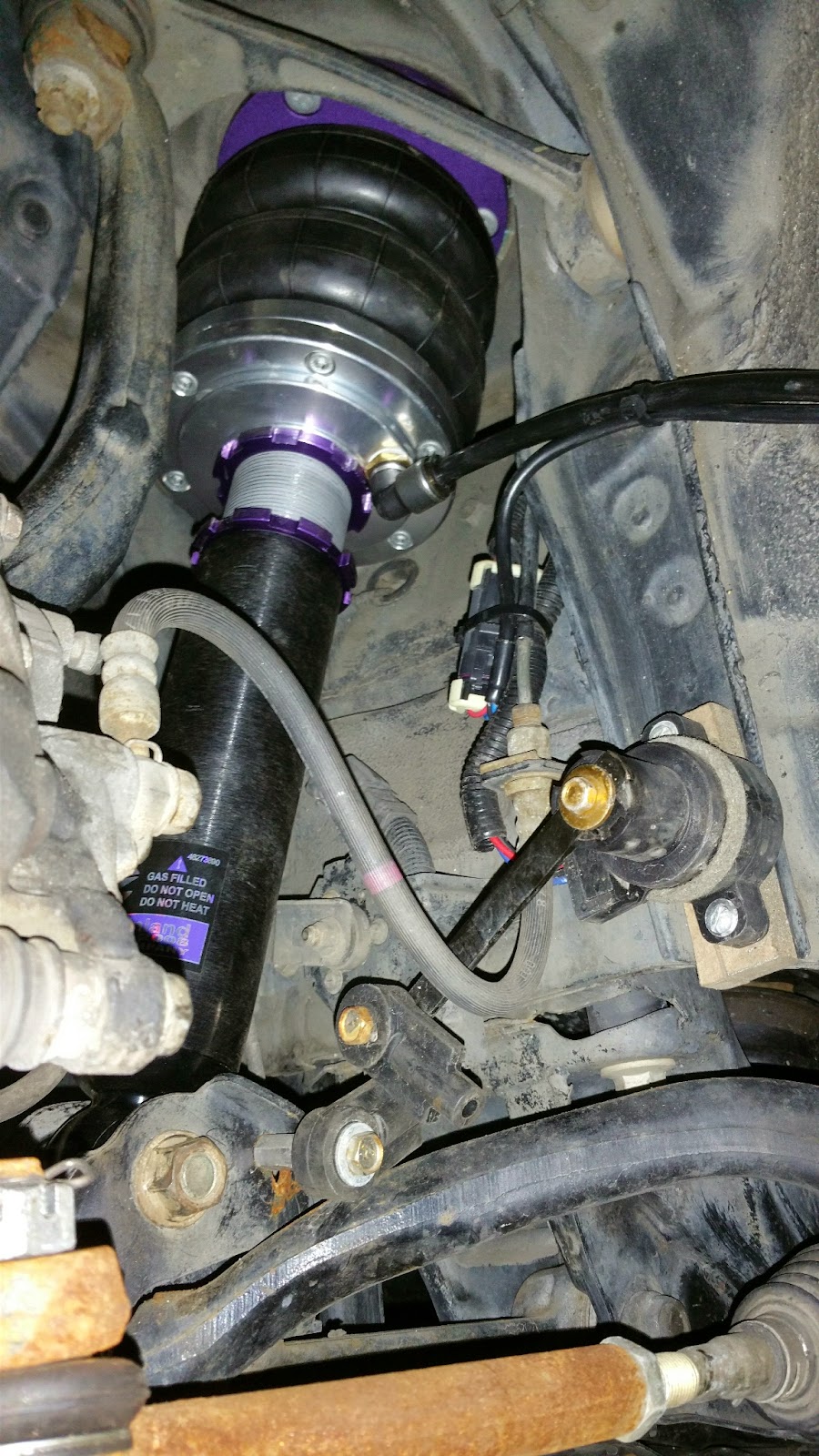 How the car sits aired out.. 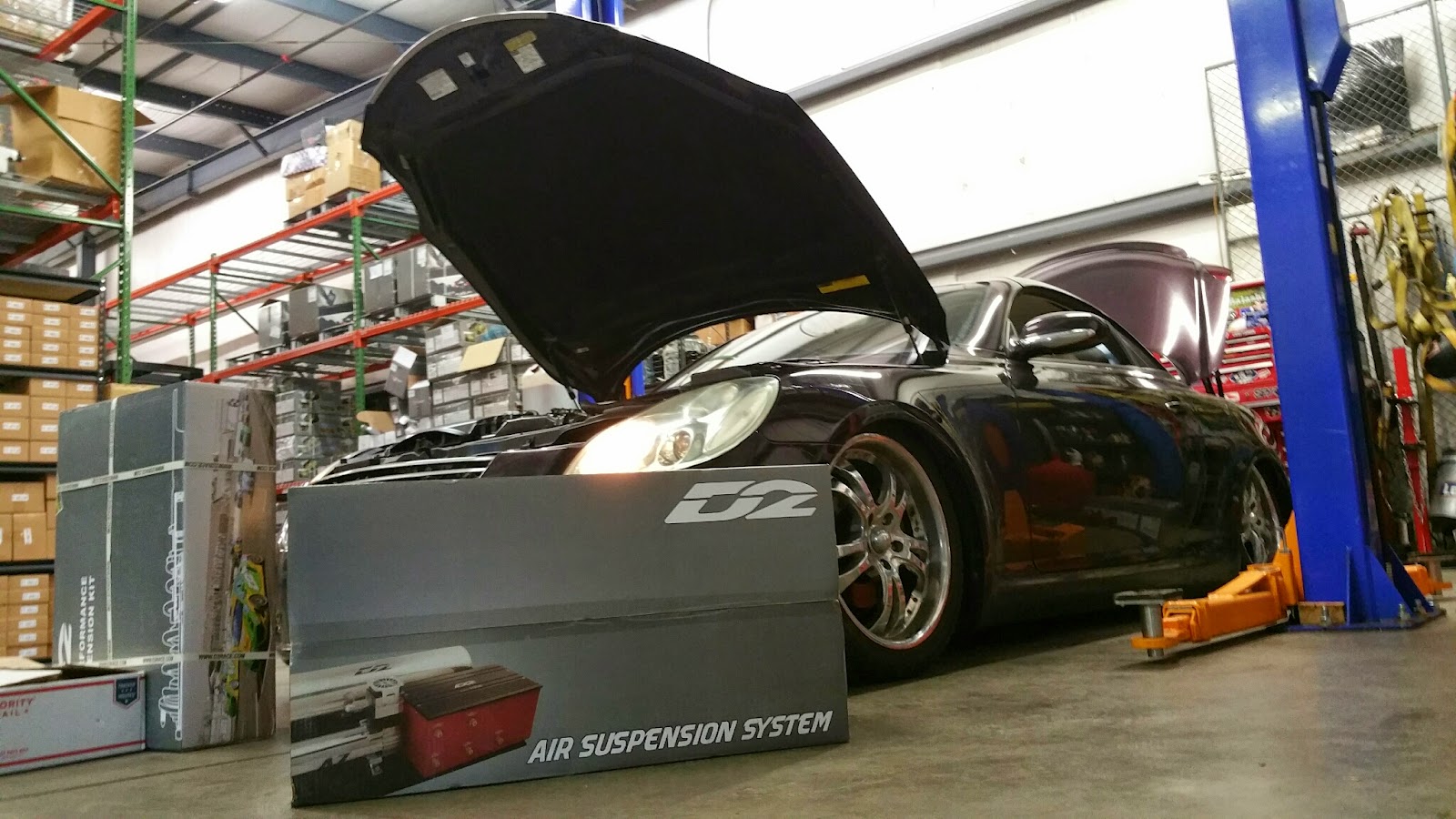 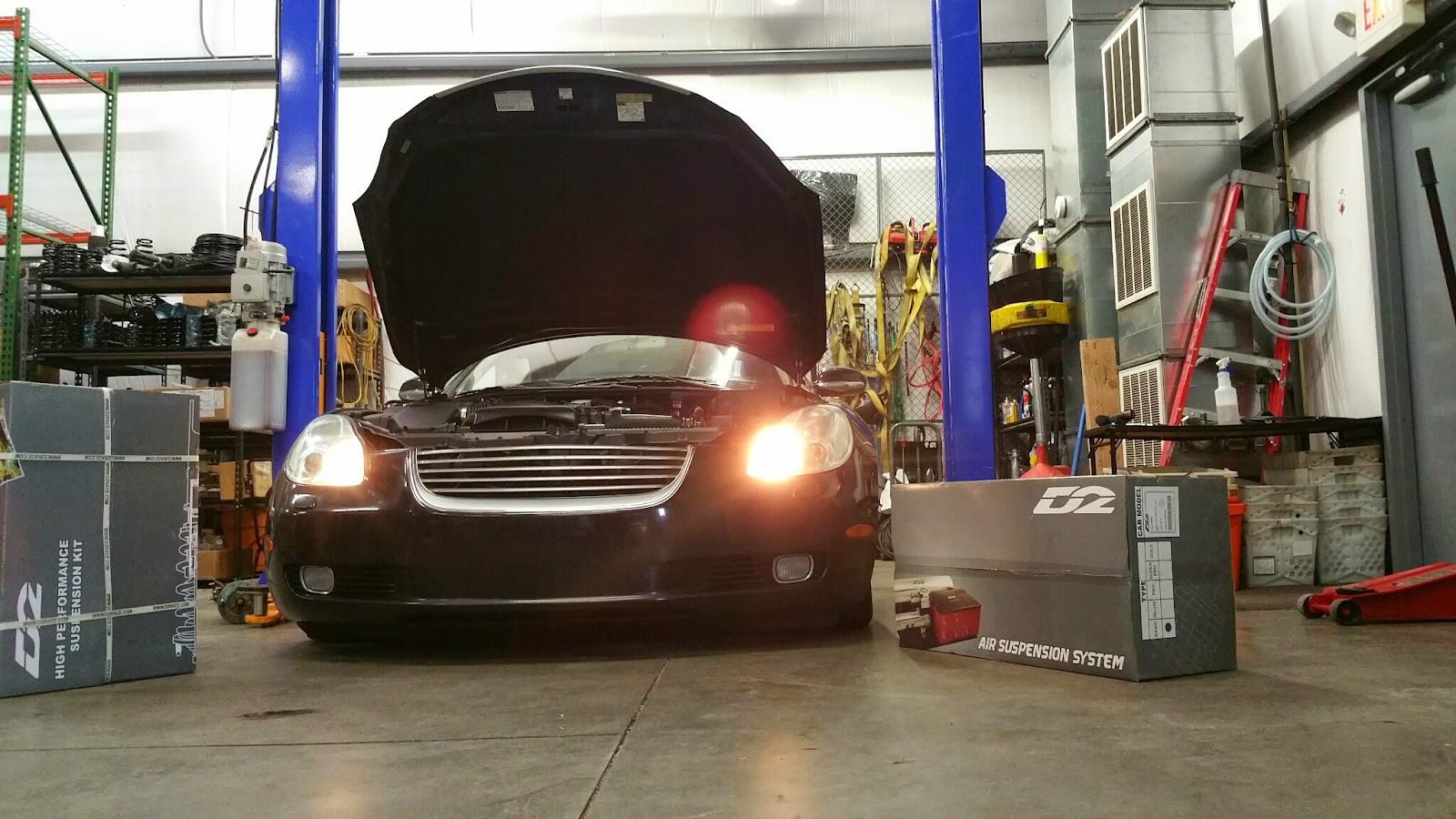 Now just need to put my wheels on, alignment, get the fenders rolled and go from there.

I want to thank WIL44 for his thread on his install it helped me plan things out a lot. His pics were worth a thousand words, so want to thank you for taking the time to document your install. His thread if anyone else wants to check it out.
http://www.clublexus.com/forums/sc-4...pension-4.html

I haven't had as much time to work on this as much as I would want to. My suspension components have been sitting here for about a month now. Had some time to install the ride height sensors. The ride height sensors for the ridetech system is a little bigger than the one for the accuair system but same concept, just had to make sure there were no issues with the wheel or suspension arms etc getting in the way. I haven't test fitted my wheels on but I did take measurements etc of it and based off of it I'm fairly certain everything will clear, or hopefully will <fingers crossedd> . 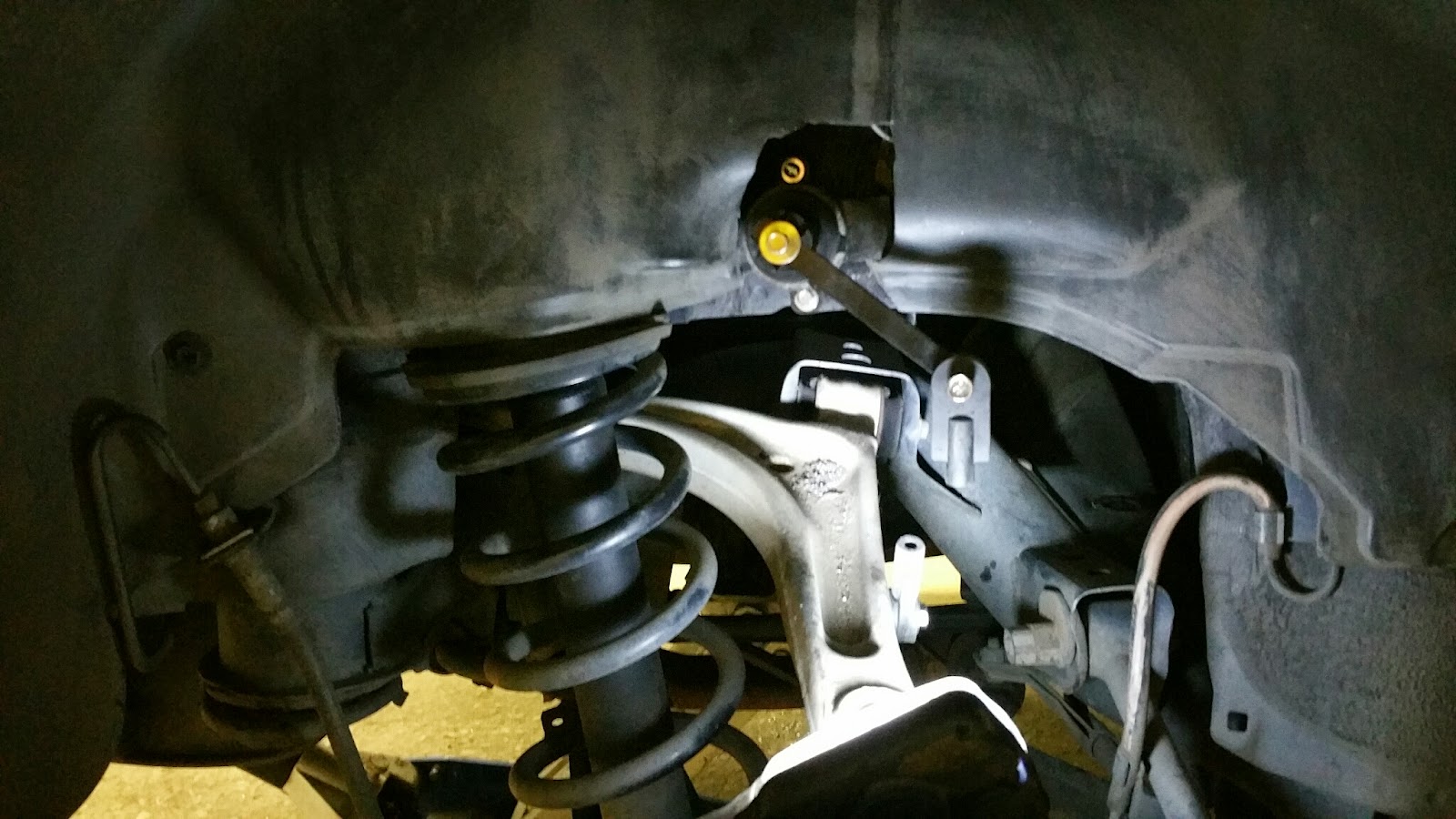 Everything is mounted and the lining was trimmed so it doesn't get in the way.

Was in a rush and didn't get a chance to take any pics of the front sensors installed but hopefully sometime next week I'll be able to install my suspensions and I'll take it then. 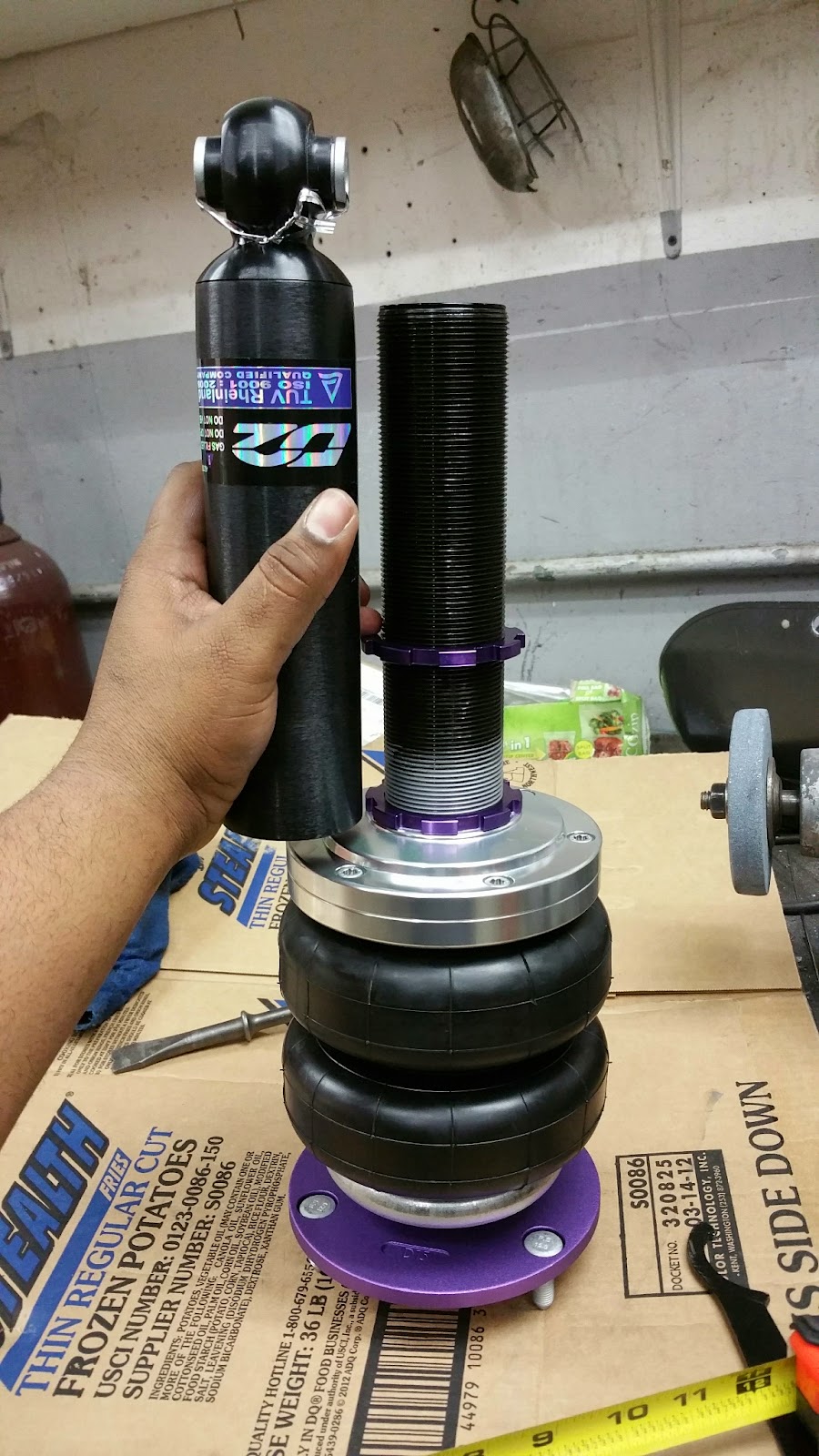 My front bags, took it apart to add a little anti seize to the threads just to be on the safe side.
By Flawless Fitment - March 08, 2015 No comments:

My air ride came in last week but haven't had a chance to work on it any. Had the day off today so wanted to figure out where I can place everything. Wow, there is NO room in the trunk and I ordered these mammoth air zenith compressors which I wish I hadn't. The smaller viair 444c could fit well in the cubby on the left and right of the trunk. Well spilt milk, so after removing all the panels etc figured out the only place I could put the compressors etc would be showing in the trunk, my initial plan was to try to hide the compressors and maybe just have the tank showing. I am able to mount the valve body ecu and wiring etc in the 'wheel well'. Got some mdf traced out the carpet with a little excess sanded it down to fit perfectly and made stands on the edges so the board sits flat and can handle the weight of the compressors and anything else I throw in the trunk.

Here are some pics of how it sits. 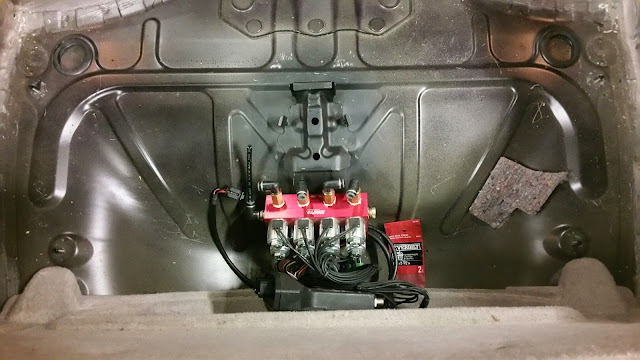 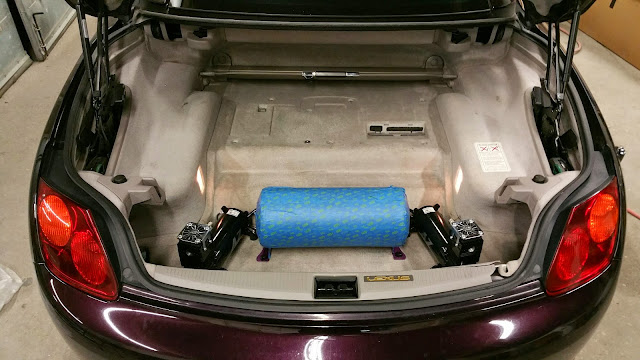 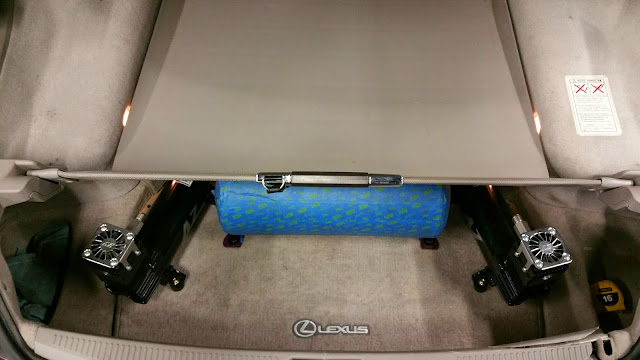 I ended up breaking the edge of the plastic trim where the door latch is so need to find one of those now.. I'm not exactly sure when I'll be able to get more done but I'm hoping soon. Plan is to mount the level sensors next and then on another day run air lines etc and install suspensions.
By Flawless Fitment - March 01, 2015 No comments: