I've been putting a transmission off for a long time almost a year really. I kept using the minimal miles I put on it as an excuse. Well a couple of days ago I felt a slight shudder between 1300 and 1500 rpm. Well needless to say that gave me enough motivation to do a flush.

I have a binder full of maintenance records for the car which was completely serviced at Lexus by the previous owner and there were no mention of anything to do with transmission fluids. This would mean at just over 170k miles the fluid is still the original fluid.

I've been prepping for this, these are the parts I had ordered:

My process in the past has been:

For the fluid flush in the past I had access to a fluid flush machine but now I don't. If I disconnect the transmission return line from the radiator and switch the car on it would start circulating the ATF and start dumping fluid out of the line. I just needed something to pump fluid back in. This is where I found an oil change pump extractor. My thought process was that I can just put all the new ATF in a container, drop a hose into it and connect that to the suction side of the pump and then connect the the dispensing side of the pump to a hose which would connect to the transmission return line. I would also connect the return line from the transmission cooler into another container to collect the old fluid that was being pumped out. I connected the pump to test it out and it moved the ATF pretty quickly. Just wasn't sure if it would match the speed at which the old ATF was coming out. I obviously did not want the transmission to run dry I figured the thresh hold I did not want to go under was 80% fill rate. Which means if 1qt is dumped out I do not want to be below 0.8qts being filled at the same time. I figured the transmission is not under any load so 80% would be safe.

For my setup I ended up with a chemical resistant 5 gallon garden sprayer that I modified slightly to accommodate for the connectivity of the hoses to the electric pump. To catch the fluid that was being dumped out I ended up using a 5 gallon water dispenser container. I marked both containers to show quart levels to see how close the rates of dispensing to fill were.

This was how I planned and finally did connect everything. Excuse the rough sketch up. 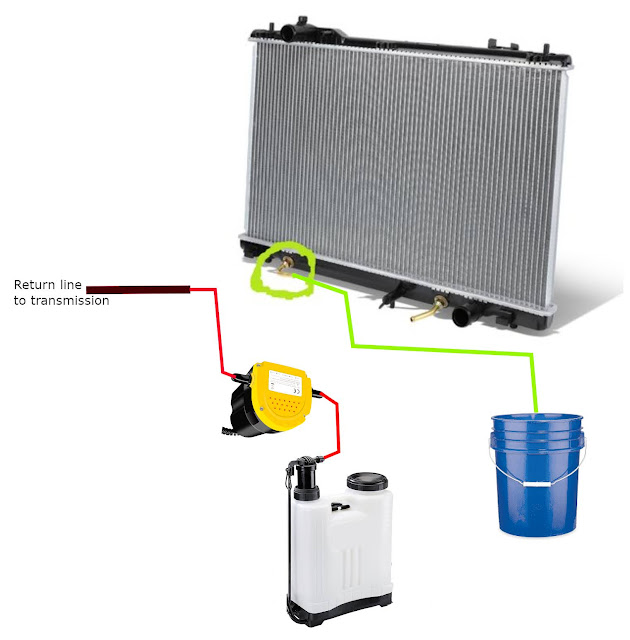 Enough of theory, onto the process. I clearly didn't have much time to document everything but stuck to my tried and true method previously outlined. Not going into detail about this because it is well documented.

I made sure I had no issues taking the fill bolt out, please do this first. If you cannot fill through this method you would have to pump 4qts of fluid using the electric pump as outlined above without the car being turned on so it doesn't dump fluid out. Taking the fill bolt out should not be an issue, if it is I suspect you have bigger issues that might need to be addressed.

Drained the fluid from the pan and then undid all the screws for the pan except for two towards the front of the car. There is still oil in the pan so if you just pry it off you are going to have a huge mess (my past mistake). Pry the pan side towards the back of the car and slowly detach it from the transmission but still hold onto that side with your hand so it doesn't fall. once you slowly pry the pan off the proceeded to now loosen the two screws that weren't fully undone. Slowly tilt the pan and the fluid in the pan will start draining. I collected all this in a container and there was very minimal fluid loss on the ground. Don't put away that catch container yet, still have to remove the filter. There is a gush of fluid that will come out when you drop the filter (past mistake again). I had just about 4 quarts collected. 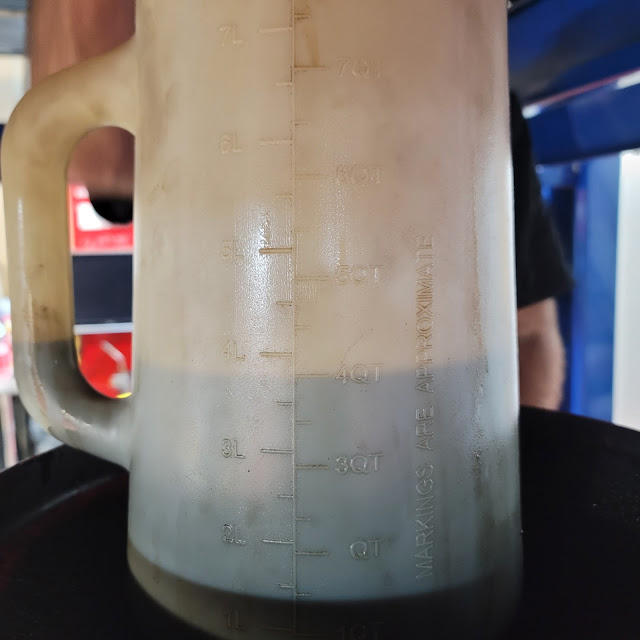 Before I put in the new filter I sprayed down everything with seafoam transmission cleaner. There was almost a thin film that almost looked like soot and the seafoam cleaned all that right off. Make sure the old o-ring from the old filter is out. Also make sure there is a new o-ring on the new filter. The filter does not come with the o-ring and will have to be ordered separately. 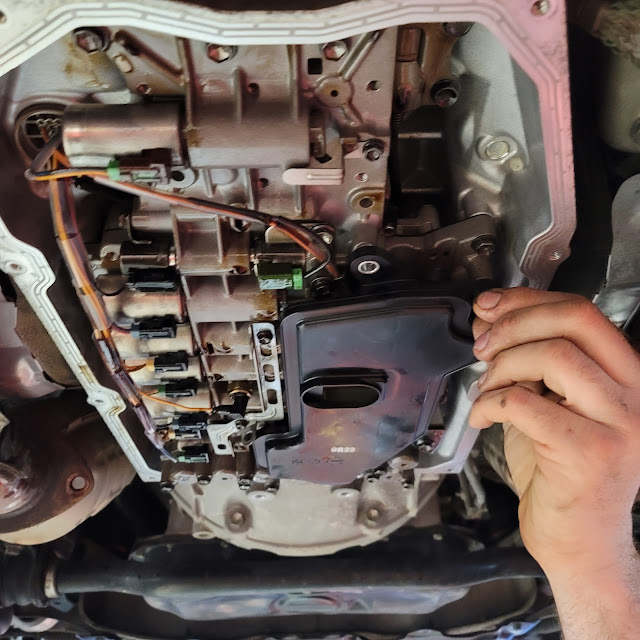 Once all that is done and the pan and magnets are cleaned put everything back. Torque for the transmission pan bolts are 9ft./lbs. I filled 4 quarts of Valvoline Maxlife ATF to fill the transmission up with ATF that was drained. I used Valvoline because it was cheaper than Amsoil ATF. This was getting drained out anyway but just wanted something to crank the car up bring it to temperature and shift through all the gears safely. The transmission holds 12qts in total and 4 being drained out and refilled will also give it a higher percentage of fresh fluid in the transmission, ,my thoughts on it anyway.
With the transmission filled, cranked the car up and slowly shifted through the gears. Turned the car off and then connected the hoses as outlined above. A friend of mine was doing most of the grunt work really so he was under the car while I turned it off and on etc. (thanks Matt). With everything hooked up turned the car on again and started the electric pump almost immediately. The fill rate was almost equivalent to the dispensing rate so we just ran the car and the pump till we saw clean red fluid coming out. This was around the 10 quart mark, proceeded to flush another quart through to be safe and then turned the car off. After the car was off we pumped in another quart of fluid so there is more than enough in the transmission. We are going to drain the excess after the transmission fluid reaches temperature. Hooked up the OBD2 scanner to show live data and then cranked up the car again after everything was buttoned up. To properly check fluid the transmission fluid should be between 95 and 108 degrees Celsius. Crank the car up and shift through the gears slowly. Once the temperature reached about 105 degrees Celsius in my case I pulled the fill level plug. Once the stream of ATF slows down to almost a gurgle put the plug back in and button everything up. You are done at this point.
Just some pictures of my contraption. 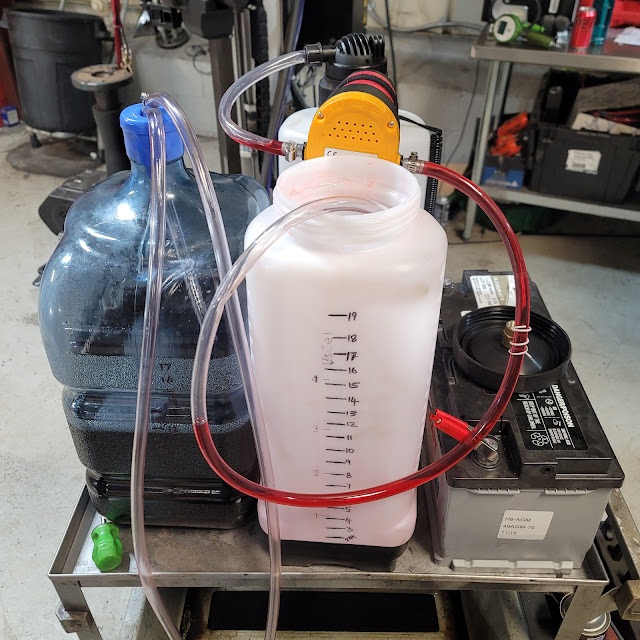 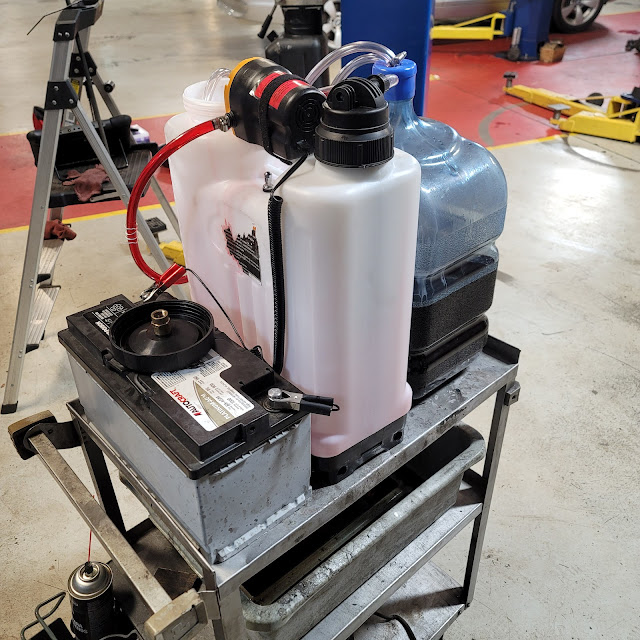 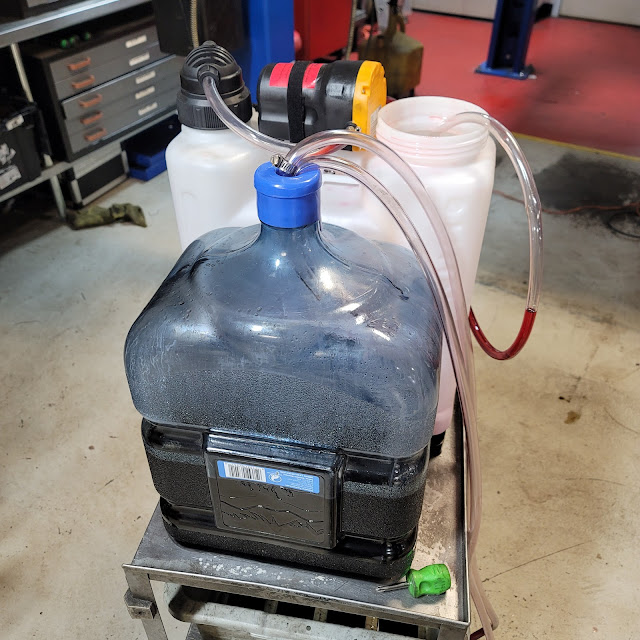 I bear no responsibility for anything going wrong here guys.. do so at your own risk. This is just a guide to what I did.